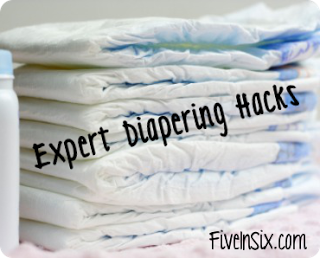 I have had a child in diapers for eight years straight.  I know – you’re jealous.  Except for the first 22 months of my diapering career, I have had at least two, and for a while, three, children in diapers. A sizable percentage of the last eight years, I have spent changing and wiping.  In fact, the amount of my life that has been spent dealing with bodily fluids has actually been my biggest surprise in motherhood.

Given my extensive experience, I will go ahead and claim the title of expert and share some of my little secrets.
1. Keep diaper survival kits stashed around the house.
Each kit should include the following: diapers, wipes, grocery bags, a changing pad and a small container of hand sanitizer.  The grocery bag is to contain and eliminate the smell as soon as possible, as is the sanitizer.  I assume you will probably wash your hands afterwards, but the sanitizer keeps your hands from stinking until then.  I just cannot stand stinky hands.  I compulsively smell them over and over again, getting more and more grossed out each time.  Ugh!  Issues – I know.
Places I have kept stashes are in a chest in our living room that served as a coffee table, in a lower cabinet under the desk in our kitchen, under the sink in a bathroom and of course, in all applicable bedrooms.  This practice was obviously born out of both genius and laziness convenience.  It’s especially helpful when the kids are young, and it seems like you’re constantly changing diapers because, well, you are.
2.  Maintain several emergency supply locations.
If you could pull off having a diaper in one of those boxes with a glass cover and an attached hammer, that would be ideal.  Since most of us don’t have access to one of those, or have little boys who would quickly destroy the glass lid and all windows with said hammer, hiding places will have to suffice.
What you must do is stash diapers in all sorts of places, so that when you run out, you will have one last diaper to pull from.  Of course, you will have to only use these diapers in case of emergency, and then replenish the supply after you’ve been to the store.

I have a few in the glove box of my car because I will never use those out of convenience because it’s just so inconvenient to get to them.  Embarrassment is also another deterrent to raiding that location for any reason other than necessity.  Having a pant-less changee follow me to the car, thus placing himself on display for the world to see with a diaper hanging around his knees is not the image I prefer to portray to our neighbors.  I’m not self-centered enough to believe that people just watch us for fun, but we do live on a very visible corner lot that sees a decent amount of traffic.  I know that people look at us when we’re outside because several months ago a neighbor introduced herself as new to the neighborhood and asked if I had any openings in my in-home daycare.  Yep.  Don’t think that’s not stored away as ammunition for when I decide to request a pay raise from the husband.  🙂

3.  When the emergency supplies are barren, pull out the big guns.
Now, I’m about to let you in on a top secret trick that only only experienced moms with multiple children know about – and maybe their sisters.  (You’re welcome, Ashlee.)  It’s called “baby bagging”.  Okay, there’s not actually an official name for it, but I decided to give it one.
You ready?  Paper towels, a Ziplock bag, scissors and duct tape.  That’s right.  (My mom is utterly mortified right now, in case you were wondering.)  I’m guessing you know where I’m going with this.  All you have to do is turn the Ziplock bag upside down and cut two leg holes in the bottom.  You then put the bag on the child and fill the bottom with a thick layer of folded paper towels.  Lastly, you duct tape the bag around the waist and both leg holes.  Voila!  You have makeshift, old school rubber pants.  Granted this isn’t a long term solution, but rather a short term fix until either your husband gets home from work, or your sweet father comes to babysit so you can make a quick diaper run.  Yes.  My dad is that sweet.
Why don’t I just head to the store with my children in tow, you ask?  Well, I actually just made a grocery run with all five kids a few months ago for the very first time.  Until then, the thought of taking all of them to the store made me feel the need to pop an Ativan, which would then make me tired and for sure not up for it. Also, going to the store with a child wearing a plastic bag is a bit intimidating. My thrill-seeking days are too far behind me now to try that one.
Well, there you have it. You are now armed with the best diapering secrets around – or at least all of mine.  Now, since I have already thoroughly outed myself, I might as well share one trick for the potty training phase.  I don’t actually have any tips for successfully accomplishing it because honestly, I totally stink at it.  In fact, I tend to put it off as long as socially acceptable, and sometimes even a little longer.  What I can give you is a trick for when it’s not going so great.
When your little one has an accident of the number two kind, throw the underwear away.  And the best way to do that?  Cut. Them. Off.  That’s right.  Kid underwear just isn’t that expensive.  If you run a cost-benefit analysis, cleaning them just isn’t worth it.  Also, when your child looses her balance and falls over as you are trying to ever-so-carefully remove the ickiness, thus necessitating a cleaning of the entire bathroom floor in addition to two chubby little legs, that margin increases dramatically.
Something that should be noted here is the need to be careful how you handle the scissors, so as not to frighten your child.  The sight of you wielding a sharp object in your hand and a look of total angst and frustration in your eyes could potentially cause life long scars.  It might even end up on her Celebrate Recovery inventory, which by the way, Jeff and I have seriously considered starting for each child to minimize work for them down the road.  I digress.  That’s another post for another day.
So, if you are still living in the world of diapers and wipes, I hope this post is really helpful and potentially encouraging.  If you are perhaps surviving the diapering phase without employing any of these techniques, go ahead and feel good about yourself for not stooping to such depths.  BUT, if decide to apply any of these practices, go ahead and feel good that you’re beating the system.  You know, kind of like stickin’ it to the man.
To those of you who are no longer funneling your husband’s paychecks to Huggies or Pampers, feel free to share these tips with newer moms as if you came up with them all by yourself.  I’m not greedy.
One thing I am, is almost about to join you in the bliss that is a diaper-free existence.  It’s not that I’m happy about not having any more babies, because frankly, I’m not.  It’s just that I’m excited to let what should happen behind closed doors, actually happen there.  Without me.