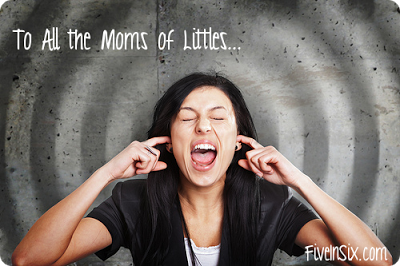 I thought I would share a little secret with you guys.  Motherhood is hard no matter how many kids you have.  A common occurrence when I’m talking with moms who have less children than me is that they belittle the difficulties and stresses they are experiencing because they “only” have one, two or three children.  I feel horrible when this happens because no matter how many children you have, motherhood is hard.  Yes, I have five children now, but when I “just” had three or two, or yes even one, it was hard.

When you have your first child, it ROCKS your world.  Your life has been about you, and your husband, but mainly you.  Suddenly your life is completely hijacked by this little, hungry, fussy bundle of joy.  You don’t get to shower, get dressed, talk on the phone or really have much human interaction at all for quite a while.  My first baby, Maya, was really fussy.  I remember holding her while I was on the toilet because I just could not handle her crying anymore, and if I put her down, that’s all she did.  Little did I know at that point that I would never, ever get to go to the bathroom by myself again.  Or ever have a shirt void of either a crusty or slimy substance.  One child is hard.

Then you have your second kiddo, and you get to figure out how to take care of two hungry, fussy and  now, winy little people.  You have to nurse one child while keeping the other one from absolutely destroying your house (or poisoning herself, in my case).  It doesn’t take long for the older child to realize that when you sit down to nurse, she has no supervision for a good 20 to 30 minutes.

I SWEAR Maya kept a running list of things she wanted to accomplish during feeding time.  As soon as I sat down, she was into something.  Maya was 22 months old when Olivia was born, and do you know what I found her doing one day?  Standing on our kitchen counter, sipping a cocktail of Children’s Tylenol.  She had crawled onto our kitchen counter, reached up to the 2nd shelf and opened a CHILDPROOF bottle of medicine.  By the way, I say cocktail because she had actually popped a straw into the bottle, I guess to make less of a mess?  Who knows?  Yes.  I got Mom of the Year for that one.  Two children are hard.

Now, if you make it to three kiddos, you get to figure out how to corral more children than you have hands.  Doesn’t that sound fun?  If you had a six year old, that might not be so bad, but if your oldest is three years old, you definitively have a problem.  No, our plan was not to have them so close together.  I had actually planned to have our next children further apart than our first two, but God thought that was just silly. Olivia was only nine months old when I found out I was pregnant with Coop.  I actually think the Lord was probably putting me through boot camp to get me ready for the arrival of the babies.  That, by the way, did not work.

Okay, I have to pause here to let you know how this went down.  The week before I found out I was pregnant with number three, I had tearfully told Jeff that I just didn’t know when I would be ready to have our next child.  Olivia didn’t sleep through the night for quite awhile, and she was a screamer.  I was so worn out, I just couldn’t imagine adding to our chaos.  Well, it was that next Saturday morning that I sent Maya into our bedroom with a positive pregnancy test.  I think Jeff thought I sent Maya because I was crying on the bathroom floor.  Poor man.  With a very blank expression, the first thing he said to me was, “Are you okay?”

What he didn’t know was over the past week, the Lord had been working on my heart.  He had really softened me to the idea of having another kiddo.  God’s sweet to me like that.  He usually preempts the shocks in my life and prepares me ahead of time.  He’s obviously aware of my hatred of change and my somewhat lack of emotional stability.

Okay.  Back to my point.  With the arrival of child number three, you now find yourself with three hungry, fussy, whiny and now, complaining little people to take care of.  Oh, and they fight.

The transition to three children was so hard for me, that it wasn’t three weeks after we had sweet Cooper that I sent Jeff to the doctor to put an end to his baby making abilities.  Why no one stopped a postpartum mom from making a permanent decision, I’ll never know.  The only thing I can think is that they saw the craziness that was my life, and felt like it was a good call, even if there was the potential I might change my mind in the future.

Three children drove me to the end of myself.  One day, I showed up at my best friend’s house and greeted her with fire in my eyes and a stern warning.  With smoke streaming from my nostrils I told her, “Whenever you decide to have your third child, you better move back home to your family!”  She now lives in Colorado, close to her parents.  She wisely did this before her third baby.  Three children are hard.

I share this because Mommy guilt can be an overwhelming force in our lives, as moms.  A sweet friend of mine says that when you have your first baby, the nurse hands it over with a big ol’ bundle of guilt.  I have to agree with her.  Mommy guilt invades pretty much every decision we make as mothers, and it can even make us feel guilty for thinking that being a mom is hard.  Well, that’s just silly because being a mom is hard.  Just because five children might be harder than one, that doesn’t mean that one child isn’t hard.  It is.

So the next time you’re around a mother with more children than you, don’t feel like you need to  apologize for sharing your struggles.  That you’re tired, emotionally worn out and at the end of your rope.  You’re just telling the truth.  I guarantee you that she remembers how hard the little years were for her, and that she’s not judging you or thinking you need to suck it up.  She will probably just empathize with you and share one of her secret coping strategies.  (Mine is Starbucks and cake – sometimes one or the other, sometimes together.)

Mom of littles, don’t feel the need to minimize the difficulty of motherhood around more experienced moms, no matter how many munchkins are circling their ankles.  Allow yourself the pride that comes with accomplishing hard things.  Cooking dinner with a newborn is a big deal.  Even if it is pasta.  Taking a little one to the grocery store is a big deal.  Even if you feed her animal crackers the whole time.  And, hey, if you actually put makeup on for the outing, you earned bonus points.

God made you to be a mother, and you can be assured that as long as you rely on Him, and parent through His strength, you’ll make it through.  It isn’t easy – not with five kids, not with one.  But, it is unbelievably worth it!

By the way, I feel the need to let you know that while I highlighted the hard and really not fun aspects of having children in this post, there are far, far more aspects that are just amazing.  I ABSOLUTELY LOVE being a mom and feel incredibly thankful that the Lord chose to bless me with my children.

« What Does Google Say About You?
Minecraft Party Decoration Ideas and Downloadable Printables »