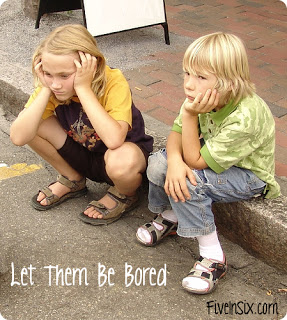 Ahh…three of the more annoying words ever uttered by children.  Uttered is probably a very poor choice of words.  They are actually usually whined in a very sing-songy kind of way.  I’m betting that if I got on a mission and actually tracked the number of times my kids shared this oh so important message over the course of a year, the average would be highest during the Summer.  (Of course I would have to add in the number of times Cooper shares his favorite version, “Mom, I’m not having that much fun.”)  I’m also betting that’s pretty accurate for most families around the country.

For some reason, boredom is something this generation of parents have deemed as totally unacceptable.  Apparently if our kids are bored, we’re either crippling them by not providing enough enrichment activities, or we’re just bad parents because we don’t care enough about their happiness.  Of course, there’s also a third option – parents are doing everything humanly possible to avoid hearing the serenade of “I’m bored” two hundred and twenty-two times a day.

Whatever the driving force, parents are on a mission to completely eliminate boredom.  I’ve seen a crazy shift across social media and in my Inbox recently.  In the last 2 weeks or so my Inbox has been flooded with email after email titled things like “Planning Kid’s Summer Activities” and “Ways to Entertain Your Kids This Summer.”  On Pinterest, recipes and decorating ideas have been replaced with “How to Keep Your Kids Happy Over The Summer” pins.  The other day, I saw an article about “How to Plan Your Summer” that actually suggested making a grid for daily activities.  As in plans every day.

Now, I’m all for fun activities and cute crafts. And I certainly understand that the “I’m bored” chorus gets real old, real fast. But can someone please tell me when it became the parent’s job to schedule each and every minute of the Summer with fun?  When did Summertime become this black hole that parents were expected to fill with creative games, activities, camps, clinics and VBS after VBS?

It obviously happened sometime between when I was a kid and when I started having kids.  As a child, my Summers were filled with swimming, riding my bike, playing with friends and our annual family reunion at the beach.  Sure, I went to a VBS, and multiple years I attended a Summer camp, but nothing like what goes on today.  And by the way, lest you judge my childhood incorrectly, it should be noted that I have amazing parents who were always super involved in my life, so don’t go thinking I must have been some ignored latchkey kid because there wasn’t a ‘Master Plan’ for my Summers.

Besides completely wearing yourself out by transforming into some sort of seasonal cruise ship director, you’re actually handicapping your child.  Self-led creative play has been proven over and over again to be crucial to a child’s development, especially in the development of the critical cognitive skill called executive function.  Don’t worry, there’s a definition below.
Alix Spiegel of NPR in his article Creative Play Makes for Kids In Control reports,

So, here’s the problem with planning a Summer crammed with structured events and activities – it robs your children of creative and imaginative playtime.  You know, the kind we had when we were little.  If you’re a boy, you were probably a pirate on a treasure hunt, an astronaut headed to the moon or a cowboy slinging guns.  Yes, guns – the real kind.  Not the kind made of a sister’s fairy wand because mom has banned the real (toy) thing.

If you are a girl, you probably spent your time as a princess or a doctor, or maybe you were a tomboy and just dug in the dirt a lot.  If you were a bit odd like me, you might have even been a mommy hiding with her baby in the play fort because we were “out on our own now.” Who knows where that came from?

At any rate, you get my point.  You rode your bike, you played in the sprinklers, you hopped from rock to rock trying to stay out of the burning hot lava, and you swam, as either a mermaid or lifeguard, of course. I don’t know, but whatever it was, you entertained yourself.

The issue with planned activity after craft after activity is that they are almost always adult directed. One of the reasons that creative play is so beneficial is because it is child directed. In this sort of play, a child learns to dig deep into his mind and come up with scenarios and games entertaining enough to keep him busy.

In their study, “Pretend Play: Longitudinal Prediction of Creativity and Affect in Fantasy in Children,”   Sandra W. Russ, Andrew L. Robins & Beth A. Christiano conclude that the “quality of fantasy and imagination in early play predicted divergent thinking over time, independent of IQ.”

Sorry for all of the vocabulary words today.  Basically, divergent thinking is creative problem solving.  Wikipedia has a good layman’s explanation and defines it as, “a thought process or method used to generate creative ideas by exploring many possible solutions.” Creative problem solving skills and self-regulation are key components to maturing into a successful and independent adult.  Isn’t that the goal here?  I think so.

Now, I’m not gonna lie. This is going to be hard at first, especially if your kids are used to constantly having mommy supplied entertainment. Your children are going to be very frustrated and annoyed as they try to figure out what the heck to do with themselves, but if you stick to your guns, they’ll eventually get the message.  So, keep the TV off for the morning, put out some Legos, dress up clothes, markers and paper and provide the snacks and smiles.  Eventually they will exercise their atrophied creative muscles and will occupy themselves.

Encouraging self-directed and creative play is just another one of those difficult but necessary parenting duties. It will initially be received with great resistance, but over time it will become the new norm. Once your kiddos realize you’re not going to budge, they’ll deal. And when your child gives you the universal complaint of, “but Mom, I’m bored,” feel free to counter with the universal parental response – “But, Honey, it’s for your own good.”

Oh, and what about all of those other moms that have their kids in a million activities and think you’re such a bad mom for not following suit?  Just smile, knowing your kid just might be their kid’s boss one day.

« A Little Relationship Advice
What Does Google Say About You? »