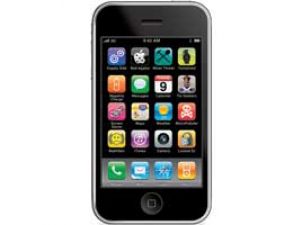 Most people would agree that the iPhone has changed a ton about our lives.  Used to, it was only professionals that had cool gadgets like that, primarily due to company issued Blackberry’s and the such.  Well, the iPhone changed that by reaching the masses. From teenagers to stay-at-home moms, everyone has one.  That is, at least according to my 7-year-old daughter.  I assure her that’s not true, but every time we go out in public, it becomes increasingly difficult to keep up the charade.

Don’t worry, I’m not writing some post about the evils of technology or our need to unplug.  I’m sure those things are true, but since I’m not gonna do it at this point, I’ll just move on.
Even an Apple-hater like me has to admit that the iPhone, and now other Smart phones, have made countless things much easier.  I mean, do you remember when if you needed directions to somewhere, you had to get on a computer, look up the address on MapQuest and PRINT THEM OUT???  Talk about the dark ages.  Now, we don’t even have to type an address into the phone – we can just ask Siri to get us directions.
Well, my almost 4-year-old, Cooper, has taken Siri to the extreme.  I’m not exactly sure what, or who, he thinks she is, but he definitely thinks she is there to grant his every wish.  Here are some of the more recent requests I have heard him make to Siri.
Coop:  “Siri, get me some Spider-Man pajamas.”
Siri:     “I’m sorry.  I don’t understand.”
Coop:  “SPIDER-MAN pajamas!  You know who he is.  He has webs.”
Siri:     “Would you like me to search the web for Spider-Man?”
Coop:  “SIRI!  BUY THEM FOR ME!  I NEED them!”
Coop:  “Siri, turn this music off for me.”
Siri:     “I’m sorry. I don’t understand.”
Coop:  “Turn off the music.  I don’t like it!”
Siri:     “I’m sorry I can’t do that.”
Coop:  “DO IT!!!!!”
Other requests have included, “Siri, I’m hungry,” “Siri, get me some new games.  I want new games on Mommy’s phone,” and “Siri, where’s Daddy?”
I’m sure preschoolers across the U.S. are frequent Siri users, and I bet most of them are making real funny requests of Siri.  Who knows?  Apple is probably recording everything we do, so they may have a vault of funny toddler quotes somewhere.  Have I mentioned I’m not an Apple fan?
In the spirit of full disclosure, I should say that our little man Cooper has been keeping us laughing since he was little.
From his cue ball head as a baby, 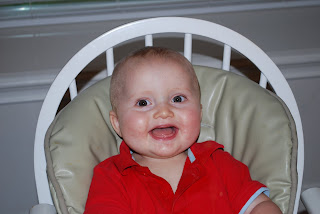 to his relentless efforts to do things he just wasn’t ready for, 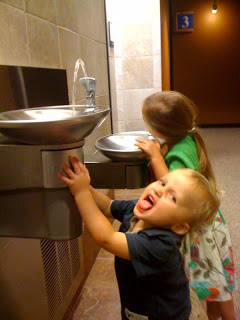 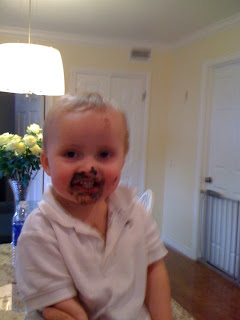 and his mischievous adventurous spirit. 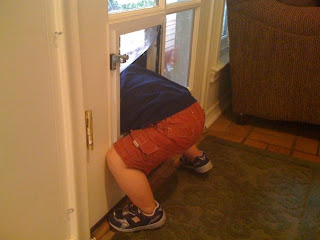 .
Yes.  He was actually completely stuck in this picture.
I must say, due to the convenient camera on my iPhone, I’m able to capture many of Coop’s snafus.  I already have so many glorious pictures for his rehearsal dinner.  That is, if I change my mind and decide to let him loose to marry some other woman out there.  Just joking, of course.  I’m totally going to let him ‘leave and cleave’.  Maybe.

By the way, Cooper did end up with his Spider-Man outfit after all.  Maybe Siri sent Daddy a text message? 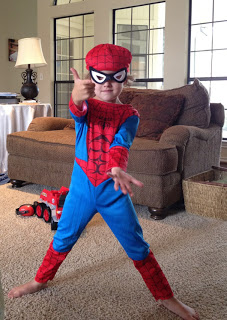