That’s what the Lord gave me yesterday.  It was a gentle kick, but still a kick.  And you know what?  I needed it.  It is really hard to not allow your circumstances to completely envelope you when you never get away from them.  That’s what has happened to me.  Life here (meaning in my house, everyday) with Henry is unbelievably difficulty.  I have had emotions, thoughts and impulses that I NEVER would have EVER thought possible for me.  I LOVE being a mother, and I ADORE my children.  I don’t send our kids to mother’s day out or preschool because I just enjoy being with them, and we have so much fun.  We sent Maya to preschool two days a week last year to get her used to being away from home for Kindergarten, but now we are going to homeschool her, so it was kind of a waste.  I believe that home with their mothers and siblings is really the best place for children, especially before they are school aged.  They are only little for such a short amount of time.  Anywya, not trying to start a debate, just sharing my beliefs on the issue.

Back to my point.  With my relationship with Henry, this has not been the case.  I never question whether we were supposed to adopt, because Jeff and I feel like it was completely clear that the Lord was calling us to do this.  I do question what the Lord was thinking.  I wonder why in the world He thought I could be a good mom to Henry.  I don’t feel sorry for myself.  I just get really angry.  Angry at Henry’s behavior.  Angry that I can’t seem to make him better, no matter what I do.  Angry that God told us to do this.  Just flat out mad.

I have developed several methods for coping with this anger.  I have been making myself pray through it, which has been really difficult to do.  I started a new Bible study a friend sent me, which has been helping me to gain some perspective.  And I have been running.  A lot.  Until I just can’t anymore.  So, yesterday at 3 pm (when it was 101 degrees outside), I decided to go running.  I normally run on the treadmill at the gym, but we were out at my parent’s house, so I was just going to have to run outside.  About 25 minutes into my run, I started worrying I was going to pass out and/or throw up.  The sun was beating down on me, the heat from the concrete was radiating back up, my hands were starting to go numb, and I realized I was a good 30 minutes from home.  TMI warning – I also suddenly needed to go to the bathroom, and after 3 babies, sometimes you just don’t know if your bladder is going to hold.  So that added just a bit more panic to the situation.  There was no breeze, and there were no trees.  At that moment, I was really wishing for some Ugandan shade.

Forty-five minutes into my run, the Lord brought a thought into my head.  He reminded me of the people in Uganda (and in places all over the world) who feel this hot and panicky and who won’t get water for hours or even days.  What kept me going was knowing that if I could just get back to my parent’s house there would be water (and a toilet).  I remembered that so many people don’t have the promise of water or food to come.  Now, I already knew this, but it has been a really long time since I have actually felt really hot or really thirsty.  Feeling that panic, when your body is starting to overheat, is scary.  And there are so many people in the world that don’t just experience that fear, they live in that fear.  Daily.  Hourly.

So there was my kick in the pants.  The Lord used an extremely hot and defeating run to wake me up a bit.  It’s not that He doesn’t care that things are really hard right now.  He just wanted to help me get some perspective.  This is hard right now because I don’t really know hard.  This is hard because my life is so easy.  Does knowing this make it easier when Henry cries at me hours on end, and when I work to console me, he hits and yells?  Not really in the moment, but definitely in the big picture. 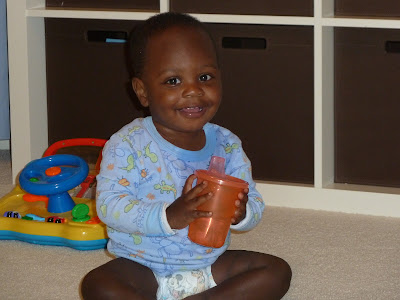 As much as I would like to believe that I am not as difficult to God, as Henry is to me, I know that that isn’t true.  So, I am grateful the Lord chose to give me some gentle reminders.  Do you need a kick in the pants about something?  If you have an inkling you might, just ask Him.  I’m sure He will reveal it to you.  How grateful I am that the Lord doesn’t leave us where we are, but He pushes us to be more like His son.