Back in an old post I mentioned that I would describe the referral process we went through in getting Hope and Henry. We are doing an Independent adoption, which means we aren’t using an adoption agency, but are just working with a babies home and a Ugandan lawyer. With our particular babies home, we don’t have as much control over the process as we would with other homes, but this is where the Lord showed us our children were, so we signed on. 🙂

So, our referral process was quite different than most I’ve head about. We applied with the home to adopt from them and sent them all sorts of information about our family and some pictures, as well. After they approved us, they began the referral process. We didn’t actually even get to specify what ages we thought would work well with our other children. We felt like we were supposed to adopt a boy and a girl, but originally thought a girl in between Maya and Liv, and then a boy younger than Coop might work well, but that’s not what the Lord had for us. 🙂

One day, I got a phone call from our babies home administrator, and she listed off 5 birthdays and genders and told us to call her back in a few days and tell her which children were our kids. I was like, seriously? No names. No pictures. No info. Just “boy, 3/4/10”, etc. She said the Lord would make it clear, and I hoped she was right, but I wasn’t convinced. Well, guess what? He did make it clear. And He did it in just 3 days.

On the list, there were 4 boys and one girl. The oldest boy was a few months older than Cooper (our 2 year old), and the youngest was Hope, who at the time was only 2 months old. God answered our prayers of whether or not we should adopt a girl close to our daughters’ ages, by not giving us that option. I LOVE when He does that. I always pray for direction in hopes that He will give a very clear answer by eliminating choices. 🙂

We felt like we were supposed to adopt Hope because the Lord had laid on our hearts a boy and a girl. Since she was the only girl on the list, we felt like that was pretty clear. The difficulty was determining which boy, out of the four we were given, was ours.

Well, Jeff and I talked through it and prayed about it a ton. We also talked to other adoptive families in our church about the different scenarios, gleaning from their wisdom and experience. Because of all the children’s ages, we were going to end up artificially twinning two kids. Doing this with an adopted child and a biological child is not recommended within the adoption community, the reason being that the two children will always end up getting compared to each other. Many times an adopted child will have delays in one area or another, so he will never be able to compete on the same level. It kind of just always puts him at a disadvantage. That being said, I believe that sometimes the Lord calls you to things that the world considers wrong or even crazy. When He does that, you just obey, knowing that the wisdom of man is foolishness to God. (1 Corinthians 3:19 )

We decided that if we were going to twin anyone, it would be best to twin the two adopted children because they would potentially both have delays. Also, since it would be a boy and a girl, they might not be compared as much and would probably have different interests and friends. So there you have it. That led us to Hope and Henry. Or, I should say that’s what the Lord used to lead us to Hope and Henry. In the end, I believe they are the children the Lord had for us, and He guided our reasoning to lead us to them.

“The mind of man plans his ways, but the Lord directs his steps.”
Proverbs 16:9

Three days after getting the list, we called the babies home and told them we felt like we were supposed to adopt the girl born on 7/3/2010 and the boy born on 3/4/2010. We then received an email with names Hope and Henry and these sweet pictures. 🙂 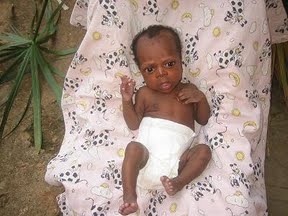 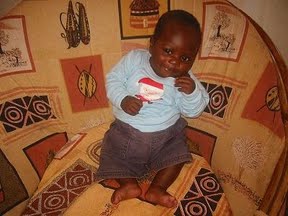 « The Mouth of the Nile and Bujagali Falls
MMR »