Greetings! I know it’s been awhile since I’ve posted. Sorry about that. I actually have a very good reason. Sweet Henry has just worn me out. He has been sick, and this is what I’ve seen for about 5 days. 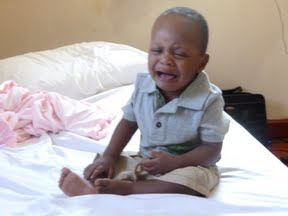 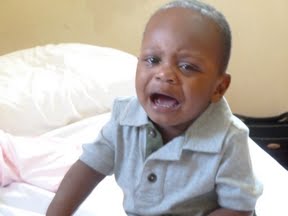 Here’s how things progressed. On Thursday, he started getting really fussy and needed extra attention. Then on Friday, he spiked a fever. I didn’t realize how high it was at first because they use Celsius here, and the nurse (who speaks just above a whisper and with a strong accent) didn’t show me the thermometer. She told me it was 38, and since she took it under his arm, I assumed she had added a degree. We gave Henry some Tylenol, and I went back to our room and got online to convert the temperature to Fahrenheit. I found that his temp was 100.4. It had felt much hotter me, but I figured I had just been mistaken.

By the end of the day, I decided we should take him to the International clinic because he had started having some tummy troubles along with the fever. Another adoptive family who was staying at the same guest house with us had a little boy got Mumps while he was here. At home I wouldn’t have rushed to the doctor, but we’re in Africa, and I just figured there was no telling what my sweet boy had. When we arrived at the clinic a nurse took his temp again, and this time it was 39.9 C, which is almost 104 F. They also did a Malaria test, which thankfully came back negative.

Henry’s fever lasted for three days before it finally broke. For one day he was in that sweet, “I don’t feel good, please hold me, Mommy” phase. Then the last two days he was in the “I hate the world and everyone in it, nothing you do will make me quit screaming” phase. I prefer the former phase, personally, but in mommy land you get them all. 🙂

By yesterday afternoon, Henry was fever free, but he started getting a rash all over his face. By evening, the rash had spread to his back, chest, stomach and upper arms. My first thought was that he had Roseola. The only difference was that the rash from Roseola usually starts on the back, not the face. It was time to take the kiddos back to the babies home anyway, so we showed the mamas the rash. The nurse there (and several of the mamas) immediately said it was Measles. WHAT?!? Panic hit me for a second. All I knew about Measles was that it was one of those diseases that we vaccinate against because it is plague-like. I know…a little dramatic, but I didn’t have Google in my pocket like normal to soothe my fears with information and pictures.

Well, his fever had left, he was feeling much better, and the nurse acted like it was no big deal. I decided to calm down and head back to my room and do some research on my favorite medical sites, knowing that if what I found was unnerving, I would be right back to snatch Henry up and rush him to the clinic. It turns out usually Measles isn’t that big of a deal. It definitely has some complications that can be dangerous, but a normal case isn’t that problematic.

Is it Measles? Or is it just Roseola? The verdict is not yet in. We are going to go pick up the kiddos in a little while, and we’ll see how Henry’s skin is looking. Either way, neither condition is treatable. You just have to let it run it’s course. Thankfully, our little man is feeling much better. So there’s our big African plague adventure. And I was worried the kids would get Mumps. 🙂