Day 4 was great!  We were able to bring the kids over to the guest house for time with us in the morning and then again after lunch and naps.  During our morning session, Hope slept the whole time in the crib, so we spent most of our time playing with Henry.  He is really curious and is always trying to see how things work.  He really likes dropping toys into bowls or bags, but gets frustrated if he can’t get them out.  It has been encouraging to see him play with toys and books.  Some of the children at the babies home have such stunted development that they just sit on the floor all day and look around.  Not Henry.  He’s into everything he can get to, just like Cooper.  Once they decide to be friends, he and his brother are going to be a dangerous duo.  🙂
After we picked the kids up in the afternoon, we headed to downtown Jinja to pick up some yogurt for them.  This was the first time we had been in public with the children.  I cannot tell you the looks we got.  Even though we are usually the only white people (or Muzungas as they call us) in sight, no one usually pays much attention to us.  Yesterday was totally different though.  It was funny because the looks we got were more of total confusion than anything else.  Some people literally had their mouths open.  It was kind of funny.  I know we’ll get looks back in the US, as well, so I guess it was just a taste of things to come.  🙂  Back at the guest house, we fed the kiddos bananas and yogurt, and they loved it!

We also had quite a breakthrough yesterday.  Hope smiled at us!  It was so precious!  She smiled when we came to pick her up from the babies home, and then when we were playing in the afternoon she flashed a few more.  She even giggled some!  It was so great to see her make some progress so quickly.  Such an answer to prayer!  Lord willing, it was just the first small step of many to come.  Also, when we dropped the kids off at the end of the day, they both cried for us.  It is really heart wrenching, but a really good sign.  At the very least, it means they like us.  It also could mean they are beginning to differentiate us from other adults.  Either way it’s good.  🙂 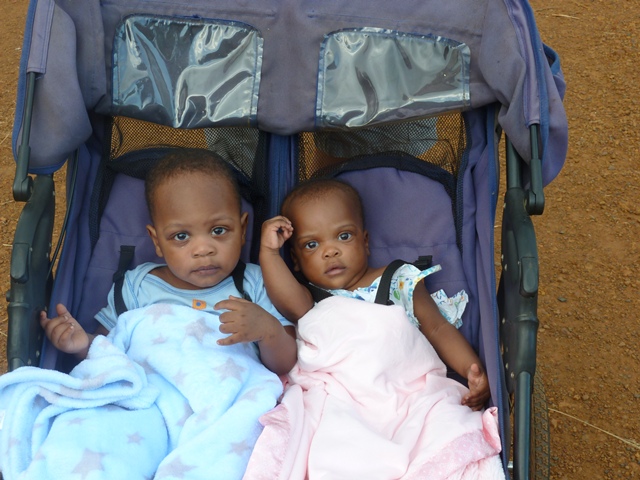