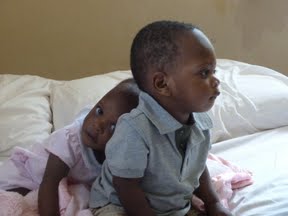 The Good News: Today we received our verbal ruling from the judge, and he did grant us legal guardianship for both Hope and Henry.

The Bad News: Even though the judge gave us our ruling a week later than what is normal, he still didn’t have our written ruling ready for us to pick up. We are hoping we will get it tomorrow (Friday), but it may be Monday until it is ready.

The Worse News: Everything we need to do moving forward hinges on us receiving the written ruling and turning it in to the Embassy. We are now at a standstill.

The Best News: God is still in control and knows exactly when and how things will progress. 🙂

In the spirit of authenticity, I want to share that today I was not so chipper and easy about things. On blogs, people can edit their lives into nice, neat little packages of perfection, but that doesn’t help anyone. The above summary of events is what the Lord, in His mercy, brought me to, after a huge temper tantrum on my part.

Today I sobbed for several hours, got really angry at God for not working things out and questioned His decisions in letting things happen the way they did. I seriously want to get back to our kids at home, and today’s events did not help in that process. I thought we would be able to make our appointment at the Embassy today, and instead we encountered a serious delay. Even if by some miracle the ruling is ready tomorrow, we won’t be able to go to the Embassy until Monday because adoption applicants are limited to a few hours in the morning on Mondays, Wednesdays, and Fridays.

Things did not go as I had planned today, and it has delayed my schedule. But you know what? It’s okay because they aren’t my plans to make, and it’s not my schedule to keep. Thankfully, the Lord has everything in His hands and under His control.

A fellow adoptive mom posted this to Facebook right as I logged on today, still in a tizzy. It described exactly how I was feeling to a T. It is so sweet when the Lord meets us right where we are. http://www.worldchallenge.org/en/node/13112