This is officially a month late, but I thought I’d go ahead and post about our anniversary trip that we took in September.  Jeff and I always make sure that at least once a year we take a trip WITHOUT the children.  We usually do this around our anniversary which is in August.  This year we went to Park City, Utah, and it was AWESOME!

I’ve decided to post about our trip for two reasons.  First, I never take pictures anymore, and we actually took a few on our trip, so I will actually have pics in a post.  🙂  Second, I wanted to share a few travel tips that worked great for us.
We chose Park City for a few random reasons.  We wanted to go somewhere pretty where we could enjoy the outdoors, and my longest time friend (24 years to be exact) Amy told me one time that Utah was beautiful.  She also happens to be my most outdoorsy friend.  🙂   Also, Southwest Airlines flies to Salt Lake City which meant we could get a cheap rate.

After narrowing down our choices to mountain locations and Southwest Airlines destinations, I started looking for hotels.  I used the website LuxuryLink.com.  It is sort of an auction site, but you can also just by packages, as well.  Really nice hotels and resorts will list packages on this site when they have vacancies or in their off seasons, and you can get a great deal.  Before I buy a package, I always go on TripAdvisor.com to check out the hotel, as well as the city in general to verify it’s a nice location.  I also price the package out by going on the resorts official website as well as a few others (Travelocity or Expedia) to make sure I’m really getting a good deal.  Once I’m convinced it’s a nice place for a good price, I then price airfare to make sure I’m not going to get hosed on that end of things.  After all of that research has been compiled, I go for it.  That may seem like a lot of work, however when it comes to hotels, or really anything actually, I’ve got Neiman’s taste on a Target budget.  🙂 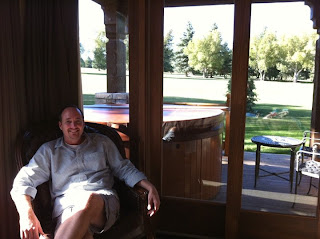 This trip it really paid off.  We saved $800 off of retail on our package!  That isn’t just taking LuxuryLink’s word for it, either.  That is also after I looked up everything and calculated the cost.  Our package included 3 nights in an upgraded cottage (not room), breakfast every morning and two massages.  Notice the hot tub on our patio behind Jeff.  The highs were in the 70s and the lows in the 40s, so we got in it about 3 times a day.  🙂
Another very cool trick we used on this trick was Priceline.com for our rental car.  I have used it before on rental cars and gotten a good deal, but never at the very last minute, which is when you can get the absolutely best deal.  Once we arrived in Salt Lake City, I found out it was going to cost $70 to get a ride to the hotel (45 mins away), which would be $140 total for each way.  So we walked about to the rental car place, and while we were in line, we used Jeff’s iPhone to try and cut a deal on Priceline.  We ended up getting a Hummer for $15 a day.  After fees and taxes, we paid less than the one way taxi fare.  I think this is my new favorite travel trick.
On a personal note, the trip was amazing.  I have an incredible husband who is so much stinkin’ fun!  Jeff and I laughed and giggled and were stupid and got lost on a mountain, and it was a blast!  Parenting can be draining, and sometimes you lose sight of the things that made you fall in love in the first place.  Not because you feel any different, but because you are so busy parenting and keeping life moving along that you don’t have time to think about it, much less experience any of it.
Jeff is absolutely perfect for me, and our trip reminded me.  He is fun and goofy, patient and sweet and ever so hot hiking through the woods with a few days scruff.  🙂  Thank you, Lord for the man of my dreams!
« Control Freak No More?
Random Cooper Pics Worth Posting »