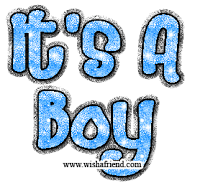 Okay, so I’ve been waiting to post this because I was going to cut out my sonogram and then scan it in to my computer, but today (a week later) I decided that may never happen, so I’m posting without a sono pic.

Well, the verdict is in . . . we’re having a baby BOY! We are both thrilled! I am so humbled that the Lord continues to bless us so immensely. We were really hoping for a boy this time, even though we would have been so excited to have another sweet daughter. I will say, I’m a bit nervous about taking care of a boy. Obviously, there are things I’m not used to dealing with. Thankfully, I have a mom, two sister-in-laws, and several sweet friends who have all had boys before me, so I should at least know where to go with my questions. 🙂

The thing that makes me most happy is that Jeff will have a little buddy. Not that his girls aren’t his buddies, but I mean a buddy who isn’t scared of loud noises and such. Jeff is an INCREDIBLE daddy to little girls. It is so obvious to me why the Lord gave him daughters because he is just awesome with them. I am so thankful that he is going to get a little boy now. I know it is going to add a whole new level of worry to my life between all of their backpacking outings, fires and explosive projects. That’s okay though because I know it will just show me how to rely on the Lord even more. It’s pretty easy to rely on Him when you are rarely in scary or uncomfortable situations.
Well, I titled this post ‘unexpected sonogram’ because I went in for one of my regular appointments (with both girls in tow), and after we had already been there for an hour, my doctor popped in to tell me they were going to do a sono in a few minutes. Needless to say, I was pretty worried, considering my girls were already really restless. Thankfully, the Lord kept them somewhat controllable, and Livy only fussed during the scan, rather than letting out her normal blood-curdeling screams. Maya was really cute. She stood by me and held my hand, as if she was comforting me through a scary procedure. When the doctor announced we had a little boy, Maya said, “Ohhhh…he’s so sweet!” in her most motherly voice. She LOVES babies and is really excited to be getting a little baby brother. She loves “petting him” and giving my him (my belly) kisses.
Thank you Lord for the wonderful gift of a son!
« Pigtails
4 Years!!!! »