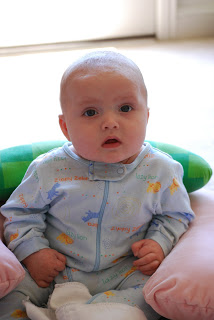 Well, I’ve been putting off blogging because I wanted to post our Easter pictures first, but that hasn’t worked. Jeff took the pics off of the camera and put them on his computer, and he has been swamped with work and ministry stuff, so I still don’t have them. I decided to move on and post other pics and ‘happenings’. Maybe by June I’ll get Easter up. 🙂
So, little Cooper is not so little anymore. He is huge in fact. At his 4 month appointment, he weighed just under 19 pounds. He’s in 12 month clothes and fills them out very well. I realized that I don’t have many pictures that really put him in proportion to anything, so I snapped a pic of him sitting in Maya’s lap.
« Sunglasses
Mother’s Day »